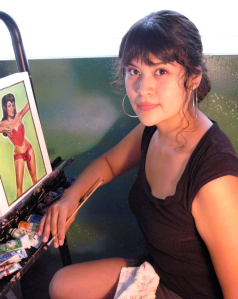 Nanibah “Nani” Chacon, is a Diné (Navajo) and Chicana artist who was born in Gallup, New Mexico and grew up both in Chinli, Arizona and Corrales, New Mexico. Her clan is To dich iini (bitter water) and born for Nakai Diné (Mexican/ Spanish people.)

Chacon began a prolific career as a graffiti artist at age sixteen, a practice she continued for the next ten years. Following the birth of her son, she began exploring other mediums, namely oil painting. Chacon has occasionally returned to mural painting, creating commissioned works for the International ISEA Arts and Technology Symposium in Albuquerque and the Navajo Nation Museum in Window Rock, AZ.

She uses an archetype of female characters in her work to explore ideas of feminism, culture, traditionalism and modernism. Her work brings forth a dialogue between culture and contemporary social perspectives, many times acting as a narrative to traditional ideas amidst the current cultural climate. 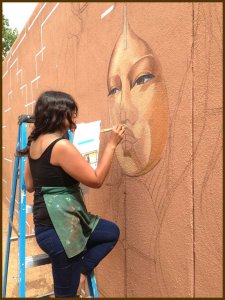 Chacon exhibits her works across the United States and abroad, and currently works out of her studio in downtown Albuquerque, NM. She has received numerous awards including the Reggie Gammon award and placed at the SWAIA Santa Fe Indian Market. She has a B.A. in Art Education from the University of New Mexico and currently teaches art in Albuquerque.

She hopes to continue to work in the field of large-scale site-specific murals to diversify her audience, reach a larger population, and build upon the social perspectives her artwork conveys.